The famed 1886 Crescent Hotel & Spa (also known as Crescent Hotel) is widely known to be one of the most haunted hotel in Arkansas.

Room 419, is said to be the second most requested room in the hotel, the first being Room 218. The legend of Room 419 speaks of a resident ghost named Theodora that haunts the room and the hallway outside. On many occasions, guests have reported that their personal belongings were neatly arranged and placed on the bedroom bench. While some have dismissed it as housekeeping by the hotel’s chambermaids, some believe it was the work of Theodora. The flickering lights of the tableside lamps and slamming doors are one of several common occurrences in the haunted room.

Visitors who have sighted Theodora describes her as an older woman; she is often seen as a translucent figure outside room 419, seemingly looking for her keys to the room. The frequent hauntings of Theodora in and around room 419 led to the naming of the room’s unofficial name, the Theodora’s Room.

Little is known about Theodora, although many believe that she was a nurse when the building was the Baker Cancer Hospital from 1937 to 1940. Another version of the story suggests that Theodora was a former patient who passed away at Room 419 under Norman Baker (founder of the hospital) torturous treatments.

1886 Crescent Hotel and Spa was built in 1886 as a retreat for the rich and the famous. Commissioned by the Eureka Springs Improvement Company, the hotel was built atop a cliff that overlooked Eureka Springs and took over two years to complete. The entire project reportedly costed the company $294,000, or $8.7 million in today’s dollars.

Renown Missouri architect Isaac S. Taylor was commissioned to design and oversee the construction of the luxurious Crescent Hotel. The building was build with magnesium limestone mined from the quarry site near White River. To ensure that the project went as planned, a group of specialised craftsman was brought in from Ireland to assist in the cutting of the limestone and oversee the overall construction of Crescent Hotel.

Apart from the quality materials used for hotel’s structure, Crescent Hotel’s interior was furnished with an array of exquisite decors including hand-painted lobby, Edison lamps, electric bells and even a hydraulic elevator. Outdoor amenities included a swimming pool, tennis courts, acres of gardens and a stable that keeps up to a 100 horses.

In 1886, the 72-room Crescent Hotel & Spa opened its doors to the rich and the famous. It was touted by the local Eureka Springs Times Echo as “America’s most luxurious resort hotel”.

After falling into disuse for its sham ‘healing waters’, the building reopened in 1908 as Crescent College and Conservatory for Young Women and ran as a hotel during summer. In 1937, Norman G. Baker turned purchased the site and converted the building into a health resort named Baker Hospital.

There, Baker denounced licensed doctors and touted miracle cures for a number of serious illness including cancer. Many of his sick patients were tortured under his ‘cancer-healing’ treatments but his scam was exposed only in 1940. Norman was convicted of fraud and jailed for only four years. Decades later, Crescent Hotel faced yet another calamity in 1967 when the building was nearly razed to the ground by a fire.

In 1997, Marty and Elise Roenigk bought over Crescent Hotel for $1.3 million and carried out a full restoration on the building. Crescent Hotel was once again opened to the public in 2003 and remained so till this day.

Deaths at the Hotel

Numerous deaths have occurred at the Crescent Hotel over the course of its history. During the construction of the hotel in 1885, one of the Irish stonemason named Michael lost his footing while working on the roof and fell three floors down to the second floor.

When the hotel was used as Crescent College and Conservatory for Young Women, a young woman fell to her death from one of the windows at the upper stories. It was alleged that she was pushed by one of her nemesis she made while studying in the school.

It was also alleged that as many as 40 deaths have occurred during the three year period when the building was operating as Baker Hospital. Many patients could not survive the treatments given at the hospital, and died either at the hospital or days after being discharged. More recently in 2017, a man named William Thomas fell to his death from a balcony located on the fourth story. Foul play was ruled out and the case was determined to be an accident.

A notable ‘celebrity’ spirit at Crescent Hotel is Irene Castle, a ballroom dancing legend in the early to mid-twentieth century. Together with her husband Vernon, the duo would travel often around the country teaching lessons for as much as a thousand dollars an hour. Irene Castle was a frequent guest of Crescent Hotel and she spent her final years as a resident here. The spirit of Irene Castle was first popularised in a paranormal encounter when a young girl began talking with an imaginary figure while having a bath in the hotel room. Her mother thought it was unusual that her daughter would spew out words such as pirouette, ballerina, tango and castle and did a quick research before discovering a connection between Crescent Hotel and Irene Castle.

Another popular haunted spot is the Crystal Dining Room. Employees working in Crescent Hotel would often find the menus and cutleries displaced while the chairs shifted away from the table. Several visitors have also claimed to see spirits dressed in Victorian-style clothing.

A well-dressed man with a mustache and wearing Victorian-style clothing can also be seen at the bar and along the stairways. Visitors thought that the man was an employee dressed as part of the night tour only to discover that he is not a staff of the hotel.

The most intriguing place in the hotel is perhaps a circular spot directly above the morgue. The spot is said to be a portal that connects to the ‘other side’. Visitors who stand at or around the spot were said to feel sudden weakness, with some reporting that they had fainted after being in the area for too long.

With its long history and extensive accounts of paranormal sightings, Crescent Hotel is undoubtedly one of the most haunted hotels in the South. For those who are interested in visiting Crescent Hotel, do sign up for their iconic ghost tour here.

Room 218, the Most Requested Room

The frequent paranormal activities in room 218 have given it the reputation of being the most haunted and ironically the most sought after room in the hotel. Room 218 was supposedly the spot where Michael the Irish stonemason landed and died.

Guests who stayed in the room claimed to have heard loud bangs from the walls and cries of a man. Michael is allegedly a mischievous ghost that would turn the television and lights on and off throughout the night. A more terrifying account says that a guest ran out of the room after seeing bloods splattered all over the wall in Room 218. Many guests were so frightened by these paranormal events that they had requested for a change of room in the middle of the night.

The haunted Crescent Hotel was featured on season 18, episode 7 of the popular paranormal television series Ghost Adventures. During the investigations, Zak Bagans and his team explored the historic hotel and attempted to make contact with the hotel’s most popular resident ghost, Michael. Several ghostly evidences were recorded, including electronic voice phenomenon (EVP) recordings such as “Got credit?”, “I’m here”, and “I’m a victim”. The team also captured on camera the moving of curtains (on their own) as well as the manifestation of a white mist on the second floor.

It is believed that that the surrounding land’s natural composition of limestone and sandstone provides spirits with large amount of energy, thus causing the frequent manifestation of paranormal entities. The Ghost Adventures’ team concluded at the end of the episode that Crescent Hotel is indeed haunted by several paranormal entities that have stayed on after their passing.

The episode was well received by viewers of the series and achieved a rating of 8.7/10 on IMDb. View the full episode of the “Crescent Hotel” episode here. 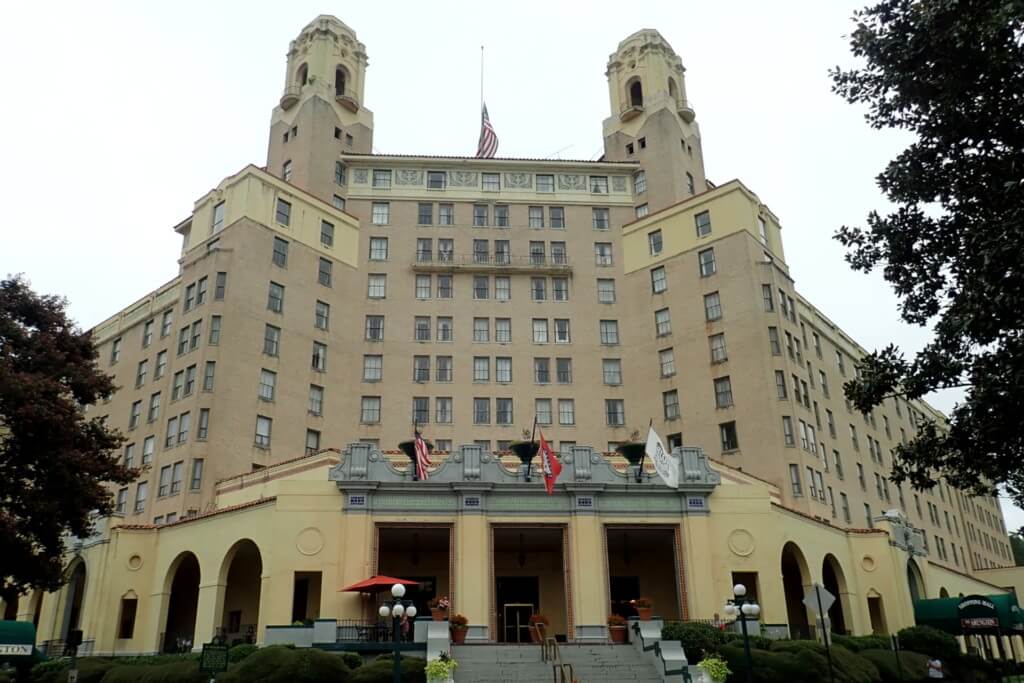