Red Onion Saloon is said to be haunted by resident ghost Lydia, one of the prostitutes at Red Onion Saloon during the gold rush. Sounds of footsteps and a strong scent of perfume often preludes Lydia’s manifestation, where she appears in full form in her long dark dress by the staircase. She is particularly known to be hostile towards male visitors. Many men have reported being pushed and scratched while touring the second floor of the saloon where the cribs are. Unfortunately, little is known about the Lydia, although it is believed that she had taken her own life in her crib after contracting a sexual disease.

On one occasion when Red Onion Saloon was closed for the day, staffs of the saloon called for the police after hearing a disturbance on the second floor. When the police approached the upper floor, they saw someone running down the hallway into a room. The police gave chase, only to find an empty room with the intruder nowhere in sight.

Opened in 1897 on the corner of Broadway & 2nd Avenue in Skagway, Alaska, Red Onion Saloon operated as one of finest bordello in the city. Built by Captain William Moore—founder of Skagway—during the peak of Klondike Gold Rush (1896–1899), the saloon served many of the prospectors who routed through the ports of Dyea and Skagway to reach the gold fields. The first floor served as a bar for rowdy drinkers while the second floor had 10 rooms referred to as cribs, where ladies would ‘entertain’ randy miners. Each cribs had several doors to provide a quick escape when necessary.

However, as gold fever waned, business in Red Onion Saloon dwindled. The brothel closed its doors in 1899, barely after two years after it was first opened. During World War II, the building was commissioned as a barracks to house soldiers stationed in Alaska. After the war, the saloon was briefly used as a bakery, a gift shop, a laundry shop and a local television station.

In 1978, Red Onion Saloon was purchased by Jan Wrentmore and restored to its former glory. The site reopened as a saloon and brothel museum on July 4, 1980, with much of its original furnishing kept intact. Today, the restaurant and museum is one of the top attractions in Skagway, attracting tourists from all over the country to visit the century-old property that has now become an important piece of Skagway’s history. The attraction also offers the Ghost & Goodtime Girls Walking Tour, a two hour long tour where visitors wander along the streets and alley of Skagway and get a glimpse of the turbulent days of the Gold Rush. The tour, which is fully guided by a “madam” dressed in period costume of the Gold Rush era, ends off with a visit to the brothel museum. Alternatively, visitors can opt for the short guided tour of brothel museum which last approximately 20 minutes.

However, Red Onion Saloon is not open year round. The attraction operates in line with the cruise ship season, opening for business in end March (early April) and closes for the season in October. The Brothel Tours are offered throughout the season on selected days. To book a ticket for the tour, visit their official website here.

Dolls of the Brothel

Back in the days, the brothel ran a ‘doll system’ to inform patrons whether the ladies were available or occupied. The dolls, each carved in the likeness of the lady, was placed upright on a ledge behind above the bar. Whenever a doll is on its back, it indicates that the lady is currently occupied with a customer.

When the deed is done, the lady would slide the money, usually a brothel token or $5 worth of gold dusts, down a copper tube from a hole in the crib’s floor to the cash register. This prompts the bartender to place her doll upright and indicate to patrons that she is ready for her next customer. As the ladies were only paid $1.25 after paying the madam and the bodyguard, they relied on private tips which sometimes amounted to tiny gold nuggets.

One of the legendary courtesan that now haunts the building is Diamond Lil Davenport, one of the former courtesan of Red Onion Saloon. Born in 1881 in Australia-Hungary under the name Evelyn Hildegard, Davenport immigrated to the United States during her teens and settled down in Montana. After a failed marriage, Davenport travelled across the country, singing and dancing at bordellos to support herself. Eventually, she joined Alexander Pantages’ Vaudeville Circuit and found herself performing in Skagway during the gold rush. She would go on to become the most popular madam in Red Onion Saloon’s history.

Standing at nearly six feet tall and spotting a diamond in her front tooth, Lil was one of the finest courtesan in the saloon. She is known for her three stringent requirements for her clients. Firstly, they had to show a clean bill of health from the local doctor in Skagway. Secondly, the client is required to show her financial ability to pay for her high fees. Last but not least, clients are required to provide a reference to proof that they are men of quality character.

After a prolonged stay at Skagway, she settled down in Seattle where she experienced another failed marriage and fell into depression. After her death in 1975 at a nursing home in Yakima, alleged hauntings of Davenport at Red Onion Saloon began. Apart from lingering around the bar and the restaurants, the ghost of Davenport is known to whisper softly to male diners and touch them (gently), seemingly to seduce them. 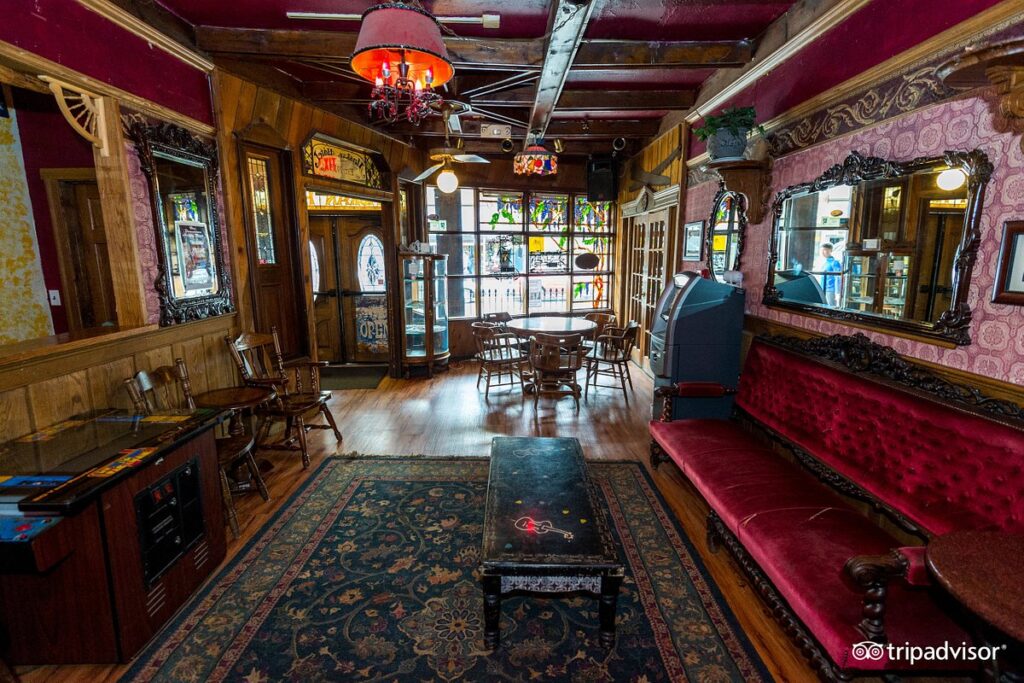