The historic Old Faithful Inn is closed to the public during the winter season. The lodge is only open during the summer season from May to October.

The historic Old Faithful Inn is a hotel located in Yellowstone National Park in Wyoming, United States. The hotel was part of a requirement by Yellowstone Park Association for Northern Pacific Railroad, then the main operator of the association, to construct a hotel no closer than 1/8th mile of the Old Faithful Geyser. Construction of the massive lodge started in 1903 with the sourcing of logs from a nearby sawmill and rhyolite stones from the nearby Black Sand Basin.

The hotel opened in 1904 at a cost of $165,000, the equivalent of $5.25 million in today’s dollar. Designed by Robert Reamer of Yellowstone Park Company, the initial building consisted of a seven-story wooden lodge named Old House. Housed in the middle of the building is a massive stone fireplace that measures over 85 feet tall and 450-metric-ton heavy.

In 1913, an East Wing extension was constructed to accommodate the increasing number of visitors to Yellowstone Park; 120-rooms were added to the existing capacity. An extension project was carried out once again in 1927 with the addition of the 150-bed West Wing, creating a massive wooden building that spanned over 700 feet long.

On August 17, 1959, the 45-year-old Old Faithful Inn suffered massive structural damage from the 1959 Hebgen Lake earthquake which measured 7.2 on the Richter scale. The building was partially dislodged from its foundation while the lobby’s fireplace was shaken loose, reducing the number of usable hearths from eight to two. The exterior of the fireplace was replaced with a single steel pipe to reinforce the structure and prevent any similar.

The hotel suffered yet another natural disaster in 1988 when the Yellowstone fires of 1988 razed through the national park. Fortunately, the Old Faithful Inn was saved by the heroic efforts of firefighters and volunteers as well as a sprinkler system which was installed the previous year.

In 2004, Old Faithful Inn embarked on a multimillion-dollar project to restore the historic building and meet the latest building codes. Apart from the replacement of the electric, plumbing, and heating systems, restoration experts from A&E Architects of Missoula also furnished and corrected modifications made from previous years to recreate the original designs by Reamer.

The inn is now a a part of the Old Faithful Historic District which consists of the Upper Geyser Basin where the Old Faithful Geyser and the hotel can be found. In 1987, the iconic structure was designated as a National Historic Landmark for its historical significance to the United States. It is also a member of the Historic Hotels of America.

Today, Old Faithful Inn holds the record for being the largest log structure in the world. It is also among the few remaining multi-story log hotels in the United States. Visitors can book one of the 327 rooms spread out across the three floors in the historic lodge.

Due to the limited rooms at East Wing that offer a view of the geyser, visitors looking to spend a night at Old Faithful Inn are encouraged to make a reservation at least two months in advance to secure a room that offers a scenic view of the natural wonder.

Hauntings at the Old Faithful Inn

The Old Faithful Inn has long been the site of countless paranormal activities and ghost sightings. It is not uncommon to spend the night at the historical lodge and have a chance encounter with one of the numerous resident ghost that resides in the building.

The legend of the ghost in Room 2 speaks of a female apparition who haunts the room. Little is unknown about the ghost, though it is believed that she is a former guests who once stayed in Room 2. In one incident, a woman woke up to see the women floating at the foot of the bed. Terrified, the woman shakes her husband awake. However, the spirit faded into the walls of Room 2 before her husband could sit up to identify the supernatural being.

The most popular resident in the Old Faithful Inn is none other than the legendary headless bride. The story speaks of a young woman who in 1915, turned down an arranged marriage to marry a servant working for her wealthy family. Heartbroken by the ‘betrayal’ of her daughter, the father offered to gift a large amount of dowry and pay for their wedding and honeymoon at Old Faithful Inn under one condition: that the couple would never receive any financial support from the family.

In spite of the harsh terms, the couple agreed and spent their honeymoon at the historic lodge. However, it did not take long for her husband’s true colors to be revealed. Within a month at the Old Faithful Inn, the husband has spent most of the dowry at the nearby bars and gambling dens. What soon followed are loud arguments that sometimes involved the mediation of staffs at the lodge. The daughter, who had realized her mistake, pleaded with her father to take her back. Sadly, she never received a word of reply.

One night, the husband was seen leaving the Old Faithful Inn after yet another argument in Room 127 where the couple had stayed. For the next few days, the wife was not seen in the dining room or the common area of the inn. Fearing for her well-being, a staff of the hotel entered Room 127. Her screams soon reverberated across the entire Old House as she found the headless body of the wife in the bathtub; her head was nowhere to be found in the hotel. Her head was only discovered days later at the Crow’s Nest when guests complained a horrible stench emitting from the upper floors. In spite of months of investigations and searching, the husband was never arrested.

Today, many claimed to have seen the apparition of a young woman in a white dress roaming along the hallways of the Old Faithful Inn with her head resting on her arms. 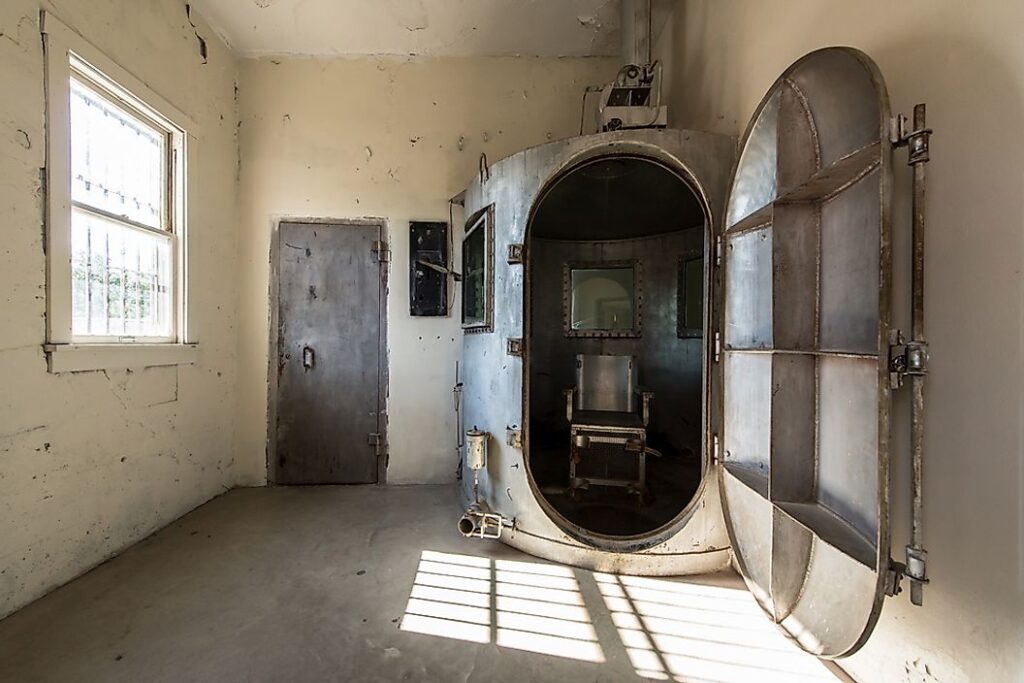