On season 2, episode 19 of the popular paranormal series Ghost Hunters, Jason Hawes, Dustin Pari, Steve Gonsalves, and Grant Wilson of The Atlantic Paranormal Society (TAPS) visited the lighthouse to investigate the ghostly hauntings. Throughout the investigations, the team experienced several ghostly activities including disembodied voices, the flashing of a ball of light, and the manifestation of dark figures.

In one of the video clips captured by the team, an apparition was seen climbing two flights of stairs in a matter of seconds before looking back at Jason and Grant. The night concluded with the verdict that St Augustine Lighthouse is truly haunted by something terrifying. The episode, which aired on May 3, 2006, received a positive rating of 8.7/10 by viewers on IMDb.

In 2008, the TAPS team revisited the lighthouse in a special episode on season 3. Titled “Return to St. Augustine Lighthouse”, the episode comes after the immense success of the first visit which captured some of the most compelling paranormal evidence ever in the show’s history. Like the first episode, “Return to St. Augustine Lighthouse” was also well received by viewers and had a rating of 7.1/10 on IMDb.

Separately in 2019, Grant Wilson and his team of paranormal investigators returned to the lighthouse for the third time in the “Return to St. Augustine” episode on season 12. The team was summoned once again, this time to investigate the unusually large number of paranormal activities that occurred in and around the site over the past year. Similar to the past two episodes on the lighthouse, “Return to St. Augustine” received a positive rating of 7.9/10.

Mystery of the Man in Blue

The infamous St Augustine Lighthouse Man in Blue is known to be a mischievous spirit that would taunt visitors and workers of the lighthouse. Nicknamed the “Man in Blue” because of its ghastly appearance in a blue overalls, the ghost is said to be the restless spirit of Joseph Andreu, the fourth head keeper of the lighthouse. Andreu, an avid pipe smoker, fell 60 feet to his death in 1859 during a routine paint job on the outside of the tower; the scaffolding he was standing on collapsed

The origins of a lighthouse on the Anastasia Island dates back to the 16th century when a series of wooden watchtowers was built by the Spanish. Improvements made to the tower over the centuries didn’t last long as erosion caused the structure to crash into the sea.

By then, in 1824, a new tower built with bricks had already been constructed nearby. The tower which originally housed lamps with silver reflectors was later replaced with a fourth order Fresnel lens. The 12-foot-tall lens contains a total of 370 hand-cut glass prism that enabled the reflected light to be visible from a distance greater than any other lenses of its time could do.

However, the erosion problem persisted. In 1871, construction on a new lighthouse further inland began. A series of erosion control measures were also put in place to extend the life of the original lighthouse. Construction of the new St Augustine lighthouse was oversee by superintendent Hezekiah H. Pittee. The Pittee family originally lived in Cape Elizabeth, Maine, and had moved to Anastasia Island to supervise the building of the new lighthouse.

After over three years of construction, the new tower was finally completed in 1874. It featured 219 spiralling steps, a state-of-the-art first order Fresnel lens and a host of amenities including a Keepers’ House (1876), two summer kitchens (1886) and a U.S. Coast Guard barracks (1941).

Today, some 200,000 people visit the St. Augustine Lighthouse & Maritime Museum annually for a glimpse of its history and the panoramic views at the top of the tower. Its popular “Dark of the Moon” ghost tour was born out of its reputation as the most haunted lighthouse in America.

The haunted history of Eliza Pittee traces back to July 10, 1873 when the Pittee sisters— Mary (aged 15), Eliza (aged 13), and Carrie (aged 4)— were playing at St Augustine Lighthouse construction site. Together with an unknown African-American girl (aged 10), the children slid down a railway cart that was used to transport building materials from the Salt Run port to the building site.

However, on the fateful day, the wooden block that was used to stop the cart from sliding down the water was not present. Tragedy struck as the group crashed into the water. The cart had also overturn, trapping the girls underneath. A young construction worker named Dan Sessions was working at the site and witness the incident unfold. Sessions raced to the water and flipped the cart in an attempt to rescue the trapped girls. By then, Mary, Eliza and the young African-American girl had drown; Carrie was the only survive in the incident.

A funeral was held in the town to mourn for the death of the three children. The town was reportedly shut down for the entire event.

Since then, the lighthouse was reported to be haunted by the spirit of Mary and Eliza. Many who visits the lighthouse are said to have seen the ghostly apparition of a young girl—said to be the spirit of Eliza— roaming the stairs of St Augustine Lighthouse. Eerie footsteps and disembodied voices of a young child can also be heard by visitors of the night tour.

The ghosts of Mary and Eliza are said to enjoy playing hide at seek with staffs of the lighthouse. In one encounter, a staff member reported hearing giggling voices at the top and thought that there were visitors who sneaked into the tower. The staff made a gruelling climb to the top only to find out that no one was there. As he descends back to the bottom of the tower, he hears the same giggles below. Upon reaching the ground floor, he once again find the place empty.

Originally named the “Bud Light Twilight Lighthouse Run”, the St Augustine Lighthouse Run was first held in 1983 as a qualifier race for the famous Gate River Run (also known as the Jacksonville River Run). Today, the annual run serves as a charity event to support the various projects organized by Junior Service League of St. Augustine.

For the 2022 version, the activities are as follows:

Apart from the race, the event also offers a host of activities for kids such as face painting, arts and crafts, and STEAM projects. Runners are also able to climb up to the top of St Augustine Lighthouse for free. Visit the Junior Service League of St. Augustine official website for more information.

In 2008, a cell phone tower technician was working on atop a tower near St Augustine Lighthouse and captured this ghostly apparition of a lady in white. The lady is said to be the apparition of Eliza Pittee. It was claimed that the lighthouse was closed to the public when the photo was taken albeit it cannot be confirmed.

Similar to the New London Ledge Lighthouse, keepers of St Augustine Lighthouse are said to have continued to keep watch of the lighthouse long after their passing. A dark figure captured in the photo above is allegedly the apparition of Peter Rasmussen, one of the lighthouse’s first keepers. Rasmussen was famously known for his ‘meticulous eye’ of maintaining the lighthouse as well as his love for cigars. Many who visits the lighthouse claimed to have smelled cigar, an unexplainable phenomena given that no smoking is prohibited within the grounds of the lighthouse.

Directions to the Lighthouse

Take note that the the lighthouse may close due to inclement weather and other events. 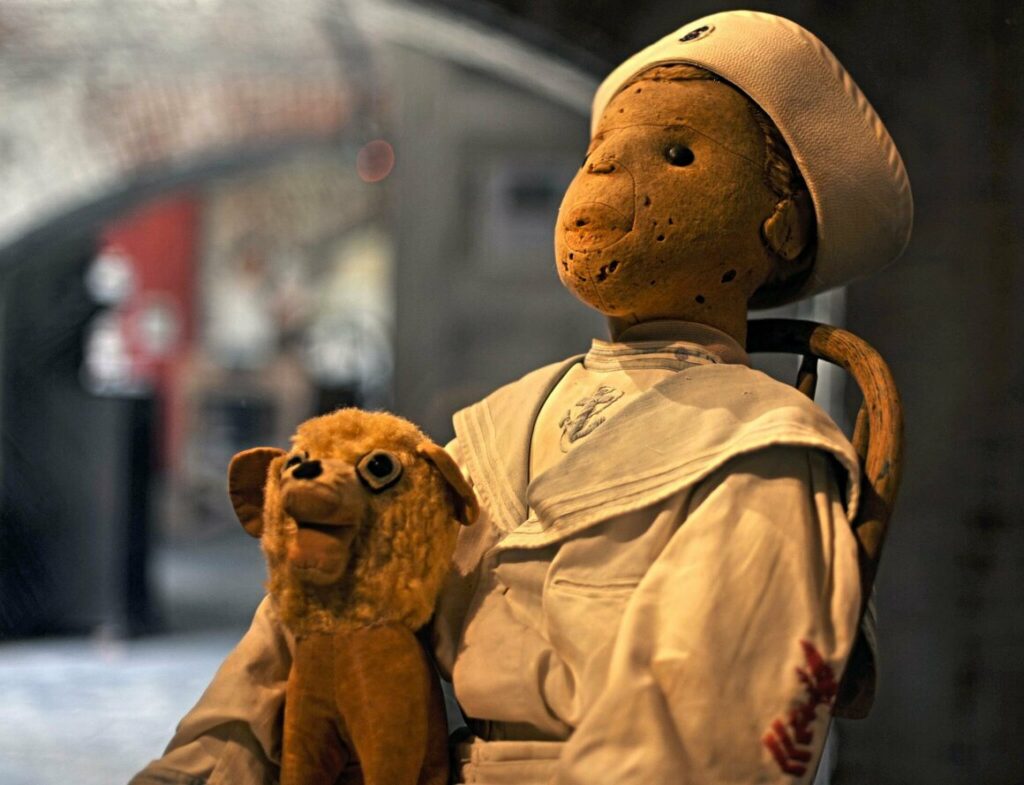 The Ghost of Grey Lady at Willard Library